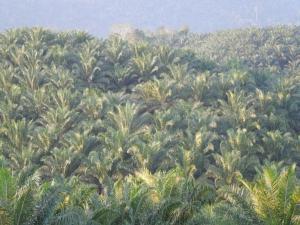 Indonesian, Liberian and International NGOs have just filed five new complaints (attached below) against Indonesia’s largest palm oil company, Golden Agri Resources (GAR). GAR which is part of the huge Sinar Mas (Golden Rays) conglomerate run by the Widjaja family with interests ranging from palm oil and pulpwood to real estate and banking, is failing to comply with the RSPO’s standards, claim the NGOs.
Both GAR and its subsidiary in Liberia – Golden Veroleum Liberia (GVL) – angered NGOs when they recently withdrew GVL’s membership of the Roundtable on Sustainable Palm Oil (RSPO), thus dodging a demand from RSPO that it halt development of its palm oil mill on contested lands.
Mina Beyan of the Liberian NGO Social Entrepreneurs for Sustainable Development (SESDev) said:
We have been helping the local communities impacted by GVL to complain about the unfair way that GVL has been acquiring their lands, since 2012. Finally, earlier this year the RSPO Complaints Panel agreed – after a detailed independent investigation – that the complaints were valid. GVL was told to stop the land grab, but they refused. And now they have walked out of the RSPO. This delinquent behaviour challenges the very fabric of RSPO. Are RSPO standards only to be observed in the breach?
According to Liberian NGOs, GVL was pushing ahead with its development despite the refusal of the Blogbo community to cede their lands to the company, despite their complaints to the RSPO, despite their complaints being upheld by the RSPO Complaints Panel and despite the Panel upholding the stop work order it had issued, after overruling an appeal by GVL against the Panel’s decision.
This is a blatant attempt by GVL and GAR to evade their obligations to the RSPO. They use their RSPO membership to attract investment and to market their palm oil but when their bluff is called they just walk away from their responsibilities, said James Otto of the Monrovia-based NGO Sustainable Development Institute (SDI).
Another complaint alleges that GAR is in violation of Indonesian laws which prohibit companies and corporate groups from holding more than 100,000 hectares of land. GAR publicly admits to holding more than four times that amount. Compliance with the law is a core principle of the RSPO standard but the RSPO Complaints Panel has avoided making a ruling on this matter for more than three years.
GAR has also delayed providing promised smallholdings to local Dayak and Malay communities from whom it acquired lands in 2007-2009 in the centre of Borneo, despite being required to do so by the RSPO Complaints Panel more than three years ago after a complaint from Forest Peoples Programme (FPP).
Indonesia says it welcomes investment in palm oil plantations to help alleviate poverty and bring development, says Rahmawati Winarni, Executive Director of the Indonesian NGO Transformation to Justice (TUK), but GAR is just taking peoples’ lands and then wilfully delaying compensating them for it. Why should poor landowners be forced cede their lands and then wait decades for promised smallholdings, while these huge companies reap their profits?Actually, it is the Indonesian government that should be stopping this kind of abuse not just the RSPO, she added.
In 2013, investigations by TUK and Forest Peoples Programme had revealed that GAR was cheating people out of their lands in violation of the RSPO standards – which require members to respect customary rights and only take their lands with their free, prior and informed consent.[1] This led to a detailed complaint to the RSPO, which the complaints panel (CP) upheld in 2015, requiring GAR to make remedy for the lands it had taken without consent. RSPO CP froze all expansion and land acquisition by GAR in all 18 of GAR’s operations that were the subject of the complaint.
Since then GAR has refused to renegotiate these unfair land deals, despite an RSPO ruling that it must make remedy for taking lands without communities’ free, prior and informed consent, notes Marcus Colchester, Senior Policy Advisor for Forest Peoples Programme. ‘Justice delayed is justice denied’ is an apt saying.
The delays have led the NGOs to file the fourth complaint.
As an RSPO member we are active on the standard-setting committees trying to make the system credible and in line with human rights law, Marcus added, but if RSPO members are allowed to get away with violations for years on end, then this all seems a bit pointless. The Complaints Panel must enforce its own decisions.
In a fifth complaint the same NGOs have also called on RSPO CP to investigate what they allege are ‘shadow companies’ owned by Sinar Mas but which GAR has not declared are under its control. This follows a similar disclosure, earlier this year, that GAR’s sister company, the pulpwood giant Asian Pulp and Paper, was hiding Sinar Mas group’s ownership of several timber estates which were caught deforesting contrary to APP’s pledges to halt such.[2] The exposure led to the suspension of APP’s efforts to re-associate with the Forest Stewardship Council with the aim of certifying its huge pulp wood estate.
The credibility of certification systems depends on transparency and verification. If RSPO members are hiding their ownership of non-compliant subsidiaries or are wilfully taking them out of RSPO when they get caught, the RSPO must investigate speedily and uphold its standards, said Norman Jiwan a Dayak human rights activist working with FPP.
The NGOs have called for GAR’s certificates to be suspended, for GAR to be suspended from the RSPO Board of Governors, for GAR to be sanctioned for repeated non-compliance and for the Complaints Panel to investigate GAR’s exceeding the land ceiling and hiding its ownership of majority-owned subsidiaries.
Ends.
Contact

PRESIDENTIAL INSTRUCTION ON PALM OIL MORATORIUM: WHAT IS UNDER THE MORATORI...
Scroll to top