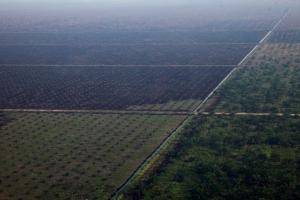 Jakarta. A community rights group has urged the Roundtable on Sustainable Palm Oil, or RSPO, to be more responsive in dealing with complaints by residents of two villages in West Kalimantan against Malaysian palm oil giant Sime Darby, which they accuse of stealing their indigenous lands.
Sime Darby has expressed its willingness to resolve the conflict.
“If the RSPO does not provide concrete solutions immediately, the community plans to sue the RSPO through the OECD [Organisation for Economic Co-operation and Development],” rights group Transformation for Justice (TuK Indonesia) consultant Norman Jiwan said in Jakarta on Thursday (30/11).

Norman, who is the legal consultant for the indigenous Dayak community inhabiting the villages of Kerunang and Entapang, said his team has already prepared the documents to be submitted to the OECD headquarters in Paris.
“[We] are just waiting for the right moment to file them.”
Redatus Musa, who represents the Kerunang and Entapang community, urges Sime Darby to comply with RSPO Principles and Criteria for Sustainable Palm Oil Production and return the land, as Criterion 2.2 of the document says: “The right to use the land can be demonstrated, and is not legitimately contested by local communities with demonstrable rights.”
“We have complained [to the RSPO], saying that the Malaysian company has trespassed into our indigenous land and turned it into a plasma plantation,” Redatus said, adding that the RSPO’s mechanisms have been inefficient, as the complaint, which was filed in 2012, is still unresolved.
According to TuK, Sime Darby, through its West Kalimantan subsidiary Mitral Austral Sejahtera (MAS), has been operating on the indigenous lands since 1995, without free, prior and informed consent.
In 1995, MAS approached local communities and promised that the plasma plantation construction will be followed by electrification, infrastructure developments, housing, hospitals, schools and employment opportunities for the residents of Kerunang and Entapang. The promises resulted in an agreement to lease the land until 2022.
Despite no formal contract with the communities, MAS obtained cultivation permits (HGU) and a land-use contract valid until 2030.
The Kerunang and Entapang communities were not aware of these developments.
In 2007, Sime Darby took over MAS. The two villages have been urging the company to prove its right to cultivate the land.
Sime Darby’s Response
Sime Darby said in a statement on Monday (04/12) that the land dispute has been discussed at the RSPO’s annual meetings since 2012.
“Throughout this period, RSPO complaint manager also visited the communities four times. As of December 2017, SDP [Sime Darby Plantation] management has held 25 meetings with the communities surrounding MAS to earnestly resolve the outstanding issues,” the statement said.
The Malaysian palm oil giant said it is fully aware of the situation and it sympathizes with the communities of Kerunang and Entapang.
“However, we are unable at this point to unilaterally accede to the community’s demands over the main contention areas … as to do so would result in a breach of Sime Darby Plantation’s terms of the concessions agreement signed with the government of Indonesia.”
Sime Darby also said it is ready to assist in dialogues with the relevant government officials to find an equitable and legal solution for all stakeholders.
“The company looks forward to the cooperation of the communities towards ensuring that the eventual return of their land is socially, environmentally and economically viable,” Sime Darby said, adding that it is also committed to the principles of sustainable development, and will continue to work to resolve the situation and fully cooperate with the RSPO’s complaints panel.
Sumber: http://jakartaglobe.id/news/rspo-must-respond-complaints-sime-darby-rights-group/
https://www.tuk.or.id/wp-content/uploads/2017/12/JktGlobe.jpg 605 909 Mubarok Khalid http://www.tuk.or.id/wp-content/uploads/2018/12/Logo-Tuk-Indonesia-340-300x136-300x136.png Mubarok Khalid2017-12-08 19:49:452018-12-28 16:12:29RSPO Must Respond to Complaints Against Sime Darby: Rights Group

Follow Us!
Tweet oleh @TuK_Indonesia
The underbelly of the financial world How it is not taking responsibility for...