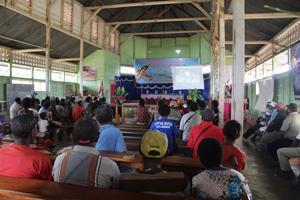 Compiled today, Thursday 10th September 2015, at the Muting Church, after listening to, discussing and analysing the issue of Customary Land Rights in the Subur Sub-District of the Boven Digoel District, and the Ulilin and Muting Sub-Districts of the Merauke District, in the Facilitator Workshop Meeting: Encounter of Clans towards the Strengthening of the Economic Livelihoods of Customary Law Communities in the Muting and Ulilin Sub-Districts, attended by representatives of the clans of Subur, Aiwait and Kaisa villages (Subur Sub-District) of Boven Digoel District,and the clans of Selauw, Boha, Pachas, Kolam and Muting villages (Muting Sub-District), and Selil and Kindiki villages (Ulilin Sub-District) of Merauke District and TuK INDONESIA, which was a follow-up meeting to the Customary Law Communities Deliberation held on 29th – 30th August 2015 in Boha village in Merauke District and in Subur village, with the participation of Aiwait and Kaisa villages in Boven Digoel District.

This meeting fully accommodated and struggled towards supporting the customary land rights of indigenous peoples of the Muting and Ulilin Sub-Districts of Merauke District, and the Subur Sub-District of Boven Digoel District, who are faced with real and concrete problems resulting from the development of policies by companies operating in Muting, Ulilin and Subur. We, indigenous peoples, affirm that there has occurred: deceit and neglect of customary land, territories and forests; destruction of the living space and lives of indigenous peoples themselves; unilateral agreements; the appropriation of customary land; non-transparent consultation, negotiation and MoU signing; intimidation; the manipulation of custom and customary rituals; ‘divide et impera’ and; the intensification of potential conflict between clans and between the ethnic groups of Mandobo of Subur Sub-District, and the Imoch clan and the Ezam clan of Muting Sub-District of Merauke District.